‘A’ grade artiste of AIR and Doordarshan

Dr. Mrityunjaya Agadi was born in the family of musicians in Agadi, a remote village in Haveri district of Karnataka state on 8th February 1965.A precocious child, he started learning music at a tender age of seven under his father Late Shri. Hanumantappa Agadi. At the age of 20, he was attracted towards the Jaipur-Atrauli Gharana , a style known for its melody arising out of an unmatched aesthetic balance between the raag, taal and bandish and then moved to Dharwad for higher learning of the intricacies of this style of music under such exponents of the Jaipur-Atrauli Gharana as Late Pt.Panchakshara Swamy Mattigatti and Late Ustad Ajeezuddin Khan(baba) and Pt Rajashekhar Mansur.  He has been giving independent stage performances since the age of 16 and has given performances throughout India including the prestigious Gadag Shri Veereshwar Punyashrama Annual Sangeet Samaroah, Abdul Kareem Khan Smruti Samaroah at Miraj, Pt. Sawai Gandharva Sangeet Samaroah at Kundagol, Malhar utsav at Mumbai, Bharat Vachanalaya at Vasco(Goa), Pt.Mallikarjun Mansur Rastriya Sangeet Samaroh Dharwad, Mysure Dasara Utsava, Dharwad Utsav, Samskrutika Saurabha and many Classical Concerts organized by Deaprtment of Kannada and culture Banglore. Ustad Alladiya Khan Smruti Samaroah at Dharwad, Mumbai and National Program of AIR.

He has been conferred the title “Gayak Chudamani” by the shri. Muralidhar Sangeet Vidyalaya of Bhadravati. He has also been honored with the title “Gayana Praveen” by Shivanand Ashrama, Kampli, Hospet Gana Bhaskara Award of Swara Sanidya, Bengalore. Innumerable institutions have felicitated him for his achievements and performance. Ashwini studio, Bangalore has recorded and released his 2 audio cassettes namely “Shastriya Ganashree” and “Basava Barayya” the latter is collection of vachanas.

His utmost devotion to Hindustani Classical Music is revealed by the fact that he completed his Vidwat in vocal and Tabala, securing second rank for the whole state of Karnataka, Sangeet Alankar equivalent to Master’s Degree in Music and went on to obtain Doctorate Degree in Hindustani Music from Karnataka 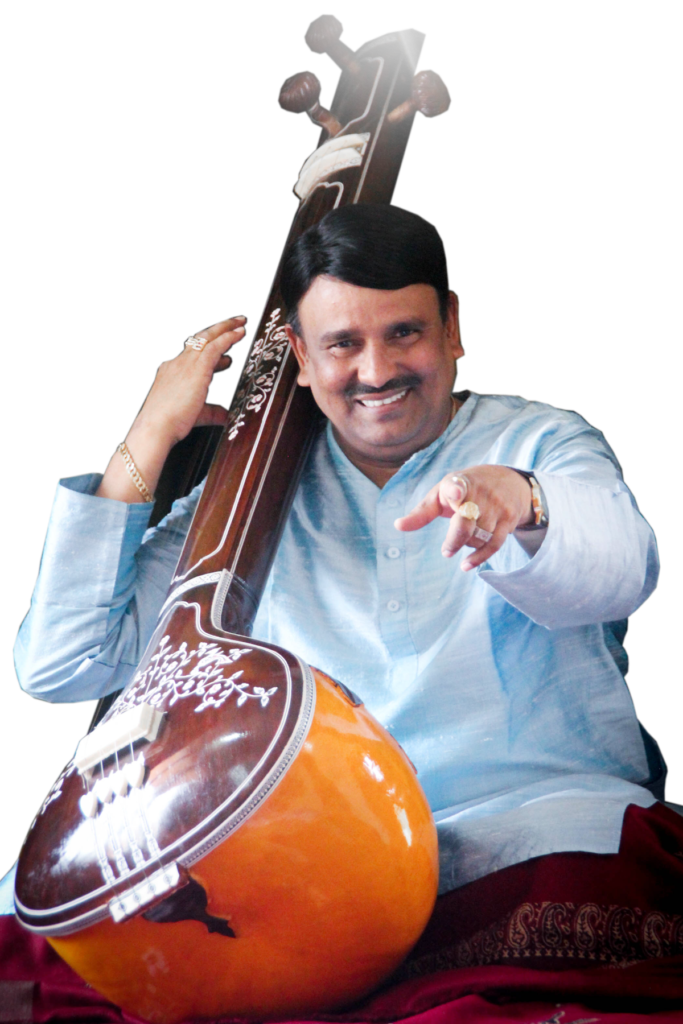 . Under his able Guidence sixteen students are awarded PhD. He wrote many Articales and books to name “Smriti Sangeet”, “Sangeetada Rasa Prashnegalu”, “Hindustani Raag Malika”. The Performances  His performances are studded not only with his scholarly insight but also with a rare melody. He is gifted with a voice that is extremely melodious, flexible and firats are amazing. Raag Sajgiri and Kabir Bhairav in his melodious voice are enchanting and look at the variety within him a concrete love for abstract , a sharp analytical power of dissect systematically and intellectual problem and also an ability to synthesize beautifully the diverse shades of thoughts, a unique intensity to fathom the mystery of music , essence of wonder of being lost in the fantastic , magical world to fairy tales and strong belief in the tradition of Jaipur- Atrauli Gharana. However his earlier learning of Gwalior Gharana also peeps into his renderings. All these colorful bits of jig-saw puzzle refused to form a very sedate straight picture.Even in his rendition of Vachanas and Dasar Padas, one can discern insights of the subtleties and nuances of his scholarly approach and beauty of a devotee. Systematic exposition  of the raga structure , brilliant phrasing and a variety of taan patterns , ease and grace in all of the three octaves mark his singing. He does not merely present a grammar of a raga but can build it up into an aesthetically pleasing experience.

Dr. Mrityunjaya Agadi is an abiding inspiration to large number of disciples which includes students of very young age to that of matured age.To the ears of listeners and music lovers, of course, a sublime treat.